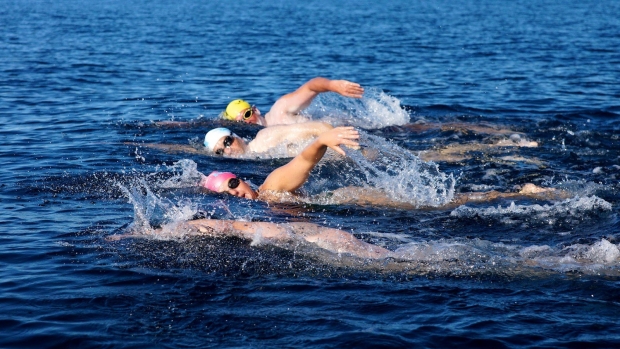 Last week, I embarked on a journey with a group of open water swimmers to swim the Strait of Gibraltar. Darren Miller, fellow Ocean’s Seven aspirant, had booked a crossing for the first week in May. I met Darren when he was in Southern California for his Catalina Channel crossing last summer, and we kept in touch, discussing the possibility of doing a tandem swim one day. When Darren extended an invitation to join him on his Strait of Gibraltar crossing, along with Oliver Wilkinson and Jamie Patrick, I couldn’t refuse. We teamed up with Kim Plewa and Michelle Nelson who had booked a wetsuit crossing on our tide, and decided to exchange crewing responsibilities. All six swimmers and our photographer/translator Brian Patterson met up in Tarifa, Spain, on the last day of April. 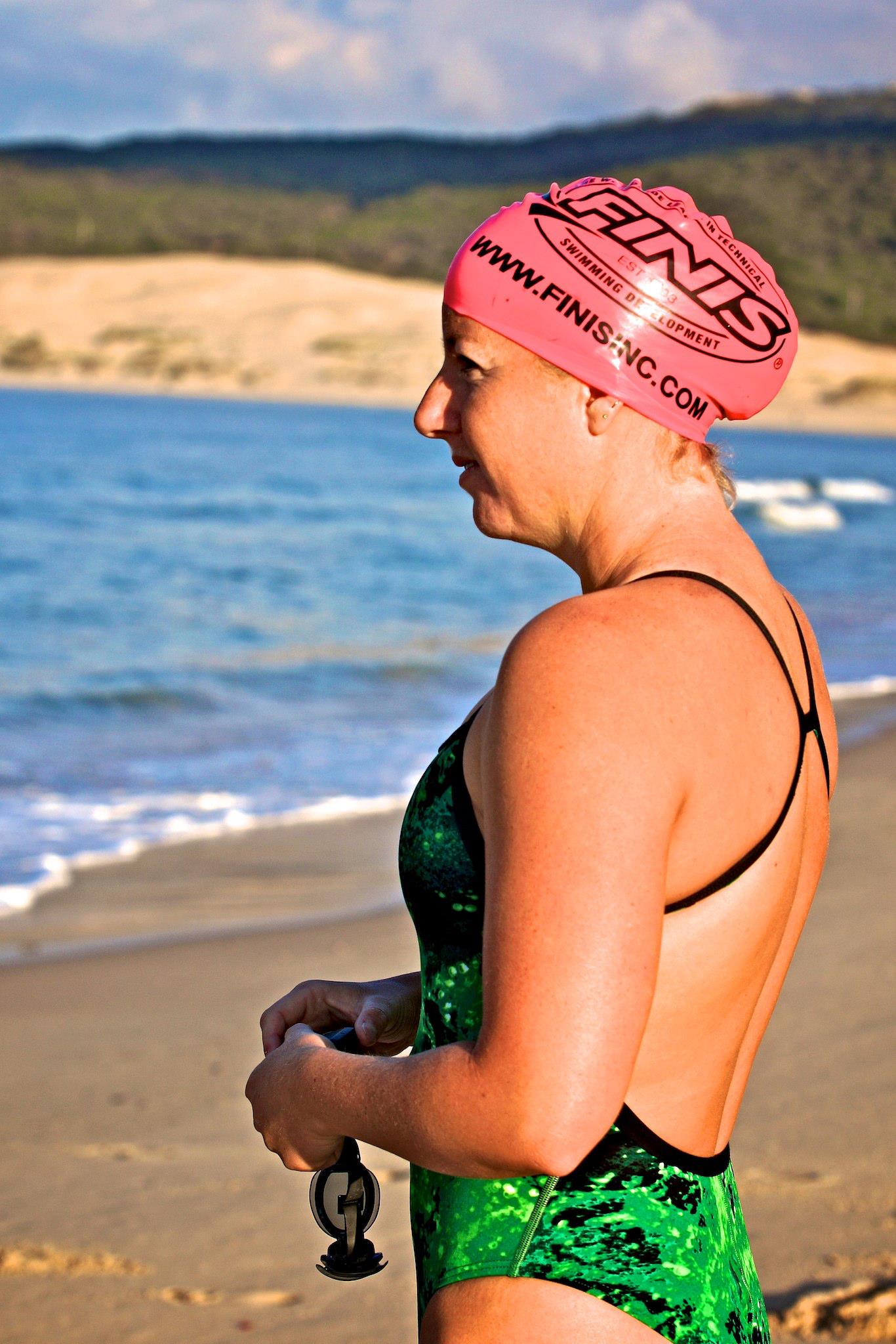 Leading up to the swim we did several swims to work out how we would swim, and decided on a four-way-wide formation, accomodating everyone’s breathing preferences. We met several times with ACNEG president Rafael, who helped us organize the swim and kept us well-informed of the conditions. Tarifa is a hotspot for windsurfers and kite surfers, so one of the main factors in swimming the Strait is wind. The prevailing current sweeps the swimmer east as they approach Africa, but Rafael assured us that our pace was more than adequate to hit the rock pilots prefer to land on. The water was a brisk 58-59 degrees, a bit cooler than we had originally anticipated. We all had to swim together, and I began to worry that I would not be able to hold a quick enough pace to keep Ollie warm.

Fortunately, our day could not have been nicer. There was almost no wind, leaving the sea as calm as a pool without lane ropes. The sun was shining and the clarity of the water was exceptional, although all we saw were strange-looking benign jellyfish and beautiful yet stinging jellyfish. The water was chilly, but thankfully we were all able to cope with the temperature. Antonio in the lead escort boat and Fernando in the Zodiac were wonderful pilots, and provided a path that was easy to follow. We had great support in Kim and Michelle, who fed us every 45 minutes from the Zodiac. Feeding four swimmers with four different sets of requests is no easy task, but they did an excellent job of keeping us happy and encouraged. I enjoyed swimming in our 4-way formation and felt like a team charging towards the African coast. At one point I kept thinking how cool it was that we had Europe behind us, Africa in front of us, the Atlantic to our right, and the Mediterranean to our left. With just a few hundred meters left I could see the rock we were to land on, and began to feel the pace pick up. I did not have the sprint in me to match any of the guys, but figured I’d see them on the rock. Once we had cleared the water, we embraced and then quickly slipped back into the water and onto the boat to warm up. We had finished the swim in 3:44. My third trip to Africa in a calendar year! 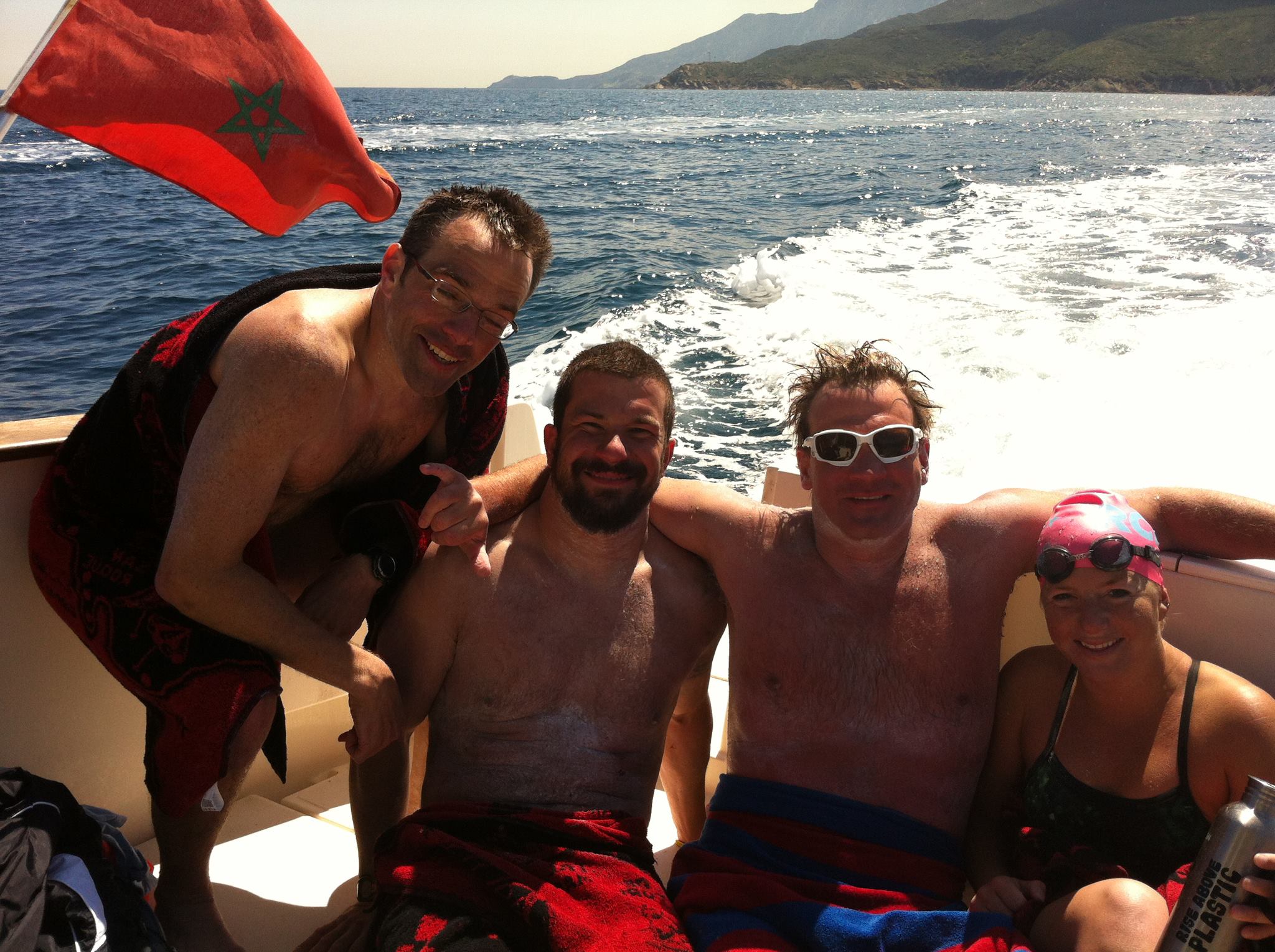 The following day, Darren and I got to crew for Michelle and Kim on their crossing, and they had similarly great conditions, although a bit lumpier. However, they were joined mid-channel by a pod of dolphins to their right and a pod of pilot whales to their left. It was great to try to return the wonderful support we received on our swim and be a part of their successful swim.

Our reward for getting six of six swimmers across successfully - a great accomplishment for an open water swim! - was a couple of days to celebrate, relax, and sightsee. We took day trips to Morocco and Gibraltar, and continued to explore Tarifa. The last two days only Darren, Kim, Michelle, and I remained, and we took our time making our way back to Lisbon, Portugal, where we flew in and out of, stopping in Lagos, Portugal for a swim. Although the water was a brisk 55, Darren and I enjoyed one of the most beautiful open water swims ever, weaving in and out of the rock formations along the coast.

My pictures from the trip are below.

Although, you’d be hard-pressed to find better pictures than the ones Brian took, which you can view here and here.

Brian and Jamie also put together a video of our swim: