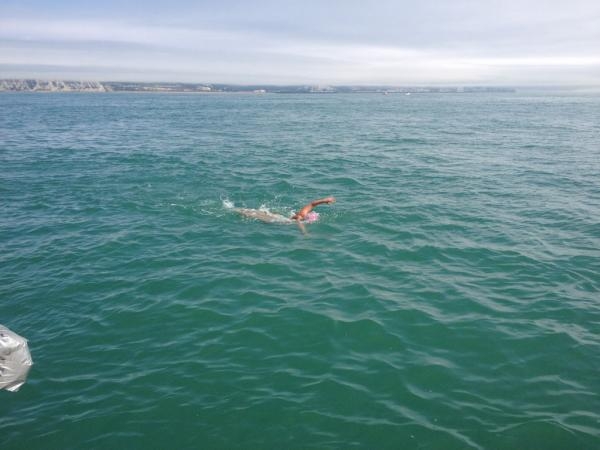 The alarm went off at 3:15am on Thursday. I hadn’t gotten to sleep until 12:30, after packing and some fitful rest for my last-minute offer to swim almost one week early of my scheduled tide.

The Sandycove swim camp taught me well, taught me to be prepared to put life on hold while you waited 6 weeks like Owen, taught me to ring your pilot the day you landed in the UK in case he offered you an early day, taught me to take confidently any swimable day offered because you might not get any more than that one, taught me to do anything and everything your pilot asked of you, that’s your job, that and to swim.

So when Paul called Wednesday afternoon saying the weather was the best he’d seen in a very long time, I jumped at the chance. He seemed pleased with my enthusiasm but bewildered that no one else had responded sooner. I felt so lucky as I heard reports that Wednesday was “flatter than a bathtub” and proceeded with the hectic packing and trying to find a last-minute crew in the area (unfortunately, my good friend and planned crew Mike and his wife arrive Tuesday from the States).

In the end, it was just Scott and I, but I knew he could pull off Super (Crew) Man, and Paul was satisfied we’d be all right.

Thursday, 3:15am. I felt refreshed like I’d had a supernap, and hopped out of bed to pack for a rediculously long training swim that just happened to be across this ditch separating England and France. I didn’t feel real yet, that I’d be doing the Channel now, but I suppose that’s as good of a mindset to have as any. I had planned for a 10-16 hour swim, which I reasoned were the two limits I either hoped or hoped not to reach, and either fantasized or dreaded I would surpass.

Friday, 3:36am. After 10 hours of swimming, every muscle hurts to touch, including - but not limited to - the miniature muscles of my upper chest. Scott drives to the radio and my hideously sounding wheezing, which must be distracting. I can’t manage to get a deep breath, so they are shallow and rapid. I think back to how much simpler things were 23.5 hours ago when our roles were reversed: me driving towards Dover and him navigating in between naps; he had slept even less than I had furiously trying to get work done to compensate for his selfless crewing adventure.

Thursday, 9am. After meeting Paul the pilot, his second, and observer Ben, we loaded the Pace Arrow with gear and motored out of the harbor and then to Shakespeare Beach. I plunged into the 15C water, brisk at first but nice when I began moving. As I walked over the tiny pebbles onto dry land, I considered picking one up before remembering there was a far more important pebble to grab later: one of my few simple instructions from Paul was to bring him back a pebble from France.

My mind was in scatters in the beginning, as it always is at the start. I reminded myself to stay steady and even, both in pace and in thoughts. I had a long swim and nothing but time. The half hour feeds ticked by uneventfully and aside from a couple of choppy bits, it was a beautifully sunny and calm day with very little wind.

Thursday, 1:00pm. The day carried on and I felt strong in the water. I noticed we had taken a rather sharp turn. I had studied Ollie’s spring tide map and how far away from the straight line path he went, and how sharp those corners were. I was momentarily excited that we had gotten pretty far, but then saw a ship. There was no way we were already in the French lane, so we must still be in the English one. It appeared we were pointed in exactly the same direction as the ships I saw, but chalked it up to my poor perspective from water level.

I counted 9 hours before I lost track. I didn’t want to know anymore because Paul leaned over and said, “I’ve got to be honest with you, we’re looking at another 4-5 hours.” I tried a smile and nodded before starting the task. I should have been more convincingly enthusiastic, but was getting cold and just wanted to keep moving.

I could make out the French coast under the low laying sliver of fog. I scolded myself for peeking but I thought if I could just reach it…

Friday, 1:20pm. A nurse is fishing around for an artery on my wrist with the same ineptitude as the crew on the Pace Arrow catching a sweater on their line. Since the drive home from Dover, my breathing had deteriorated to the point that getting dressed took immense effort. At the hospital they placed an oxygen mask over my face and began a whirlwind of tests. After the chest X-ray produced results, half the hospital staff made their rounds to see this strange case. Fluid in the lungs is not wildly uncommon, but the theory that I have Cold Water Pulmonary Edema and they’d only seen one other case was cause for visits, introductions, and requests to anonymously publish my data. It was a chore just to converse: I’d had 4 hours of sleep over the last 2 nights and had more tubes and needles coming out of me than I could count. Most of my symptoms fit the theory, but my memory loss remained a puzzle. One of the many faces asked, “What is the last thing you remember before the episode?”

Thursday, 7:00pm. Paul left the helm to get my attention in the water. He told me we were against a tide that was sweeping us so quickly that landing anywhere would be impossible. Quite simply, the swim was over. I was so cold, and wasn’t fully comprehending. “So it’s over?” Yes, everyone on board somberly nodded. I reached my hand up, and just before another hand met it I withdrew mine. “Are you sure?”, I pleaded. Then the fog overcame me.

Thursday, 8:00pm. “Am I turning into an armadillo?” Scott was lying next to me and looked confused. I asked again, frustrated, unable to comprehend why my question was anything other than normal. He said something I couldn’t make out, and felt the heavy weight of a bizarre dream lifting. “Nevermind,” I blushed. He wanted to take my suit off but I protested; his body heat was so warm and I missed warm. I didn’t understand what happened and had no idea where I was. I changed and left the dark room with beds, only to find myself on a boat. Paul was telling me it was okay, that there was nothing else I could have done. Scott and I gathered our things. I remembered the French pebble only to realize I’d never gotten there. I asked how I got on the boat; I had no memory of it at all. Calmly, I turned to Paul and asked if I could try again during my tide. He told me to call him in a couple of days.

Driving home, it still didn’t feel real. Was this all - the early swim call, the nice weather, the forgetting, the not finishing - just a bad dream? I dreamt it other ways. When Paul said 4-5 hours, I grinned and cheered, “Let’s do this!” and set off against the tide with a fury. When Paul told me it was over, I tactically convinced him to let me try to break through the tide. Perhaps it was just a tough patch of water? Perhaps I could turn my arms over faster? Perhaps if I just swam in place like I’d always heard of others doing I could turn in for land 6 hours later when the tide slacked?

Obviously, my memory loss and hospital stay point to the crew making that heartbreaking decision at the last possible safe moment. They did the right thing. I just have so many unanswered questions.

As soon as I can ditch the hospital gown, I must call Paul and hear his perspective. I trusted his judgement completely, and still do, but I need to hear how a swim going so well for so long from the swimmer’s perspective ended like this.