Europe and Reflection on Manhattan 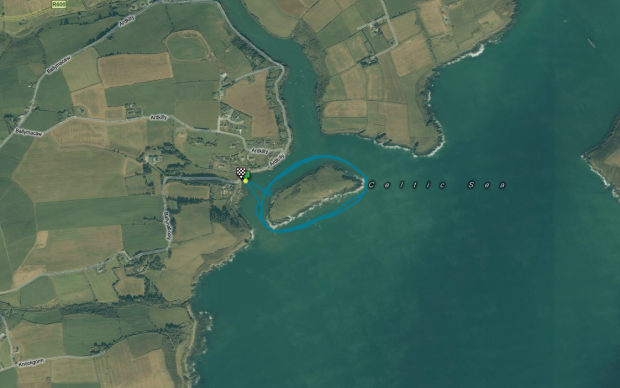 Wow, I’m on a roll with cool GPS maps. Scott and I are almost a week into our Europe trip and are staying in Kinsale, Ireland, a small village in Cork. This morning, I joined Ned Denison and his open water group for a swim. Many of the swimmers were doing long qualifying swims for their Channel attempts this season; I just hoped in for 3 laps around Sandycove island. It was a beautiful swim: sunny, flat, good visibility, and much different sea life than I’m used to – strange variations of seaweed, tiny fish everywhere, and a bottom so shallow I could see crabs walking along! It was so nice to be back in the water, and in such a great place. The worldly GPS images will continue on, and I will post anything swim-related on our trip here. Not until mid-July will I be back for a Laguna map…sorry Uncle Dan.

A week has passed since I finished MIMS, and while traveling has been a huge distraction from reflecting on the swim, it seems almost every night I lay awake unable to kick a feeling of unfulfilled goals and realize the sense of accomplishment I know I should be feeling. This may startle those of you who I have not talked to personally, as I did swim around the entire island, and in a respectable time in my opinion, so let me explain.

When I entered MIMS, my main goal of course was to finish the swim and do the best I could, but in the back of my mind I set another goal: to be among the top three women to finish. I felt this to be a reasonable, yet challenging goal. I trained to finish, but I also trained to race and compete. Although training started out spotty for a number of reasons, on the day I felt confident in my preparation. Sure, I’d make some minor changes now looking back, but I’m happy with how I trained and would not have changed the big things. I also know I did all the research I could – reading about the swim, learning the NY waterways, talking to those who have done it, won it, and kayaked for winners. I had a plan going into the swim. My preparation was solid.

Two mistakes: not sticking to my plan, and settling.

I felt perfect starting. Good energy, just enough time in the water to swim around and get warm, and a calm, mostly non-violent start. I did not go out with the leaders, as planned. I swam my pace at the start, and eventually found my kayakers first, then boat. With a swift current, we flew up the East River in no time at all. The plan here was to get into a rhythm and enjoy going under the iconic bridges of NY, which we did well.

Again, as planned, I picked up the pace a bit going into Hell’s Gate, where the turbulent meeting of rivers slows swimmers down, a natural place to make up ground. I felt good and continued on that way in the Harlem. At MIMS, the race takes place in the Hudson. However, when my team and I noticed I was closing in on another woman in the Harlem, we got caught up in the excitement of it. I’m told I passed several swimmers in the Harlem, but this one I noticed, this one I raced, and this one I gave my energy and attention to. I felt good and believed I could hold her off (for 5 hours). Shortly after, I ran into a momentary stomach problem, most likely caused by the taste and smell of gaseous fumes from many boats crowded into the narrow Harlem. I have a phobia of pucking, and panicked for a moment before taking a few deep breaths, continuing on, and feeling much better. I had minor intestinal issues for most of the race, which is unusual for me, but other than that brief barfing scare, there was nothing that hindered my performance or can be offered up as a scapegoat.

For quite some time I longed for the Columbia C (halfway), and it finally came. We had a very easy time maneuvering the sometimes-challenging Spyuten Dyvil (another convergence of rivers) and swiftly made our way into the ebbing Hudson. The powerful river carried us back home at an unbelievably swift rate (to give an idea, we covered the second 14 miles in less than 4 hours!) but if it weren’t for the unusually fast moving scenery, I would have never known. The south-flowing Hudson was confronting a north-blowing wind, creating a good deal of chop to fight through. After an hour it really began to pick up, and my left shoulder knew it and would acutely remind me each time it pulled. I was achy and tired when I was told, with an hour and a half to go, that a woman was closing in on me. Again, I surged, but with no idea of how long I would be at that pace. At that point I couldn’t have told you if I had one mile left or 10. I surged like I had one, but it turns out I had about 8. Inevitably the surge turned into a half-surge, something more sustainable. At my next feed stop I frantically asked for her number while squeezing as much of a GU as I could in my mouth, and kept swimming before they could tell me they did not know. Soon enough, I knew. I could see Samantha’s number and cheering father out of the corner of my eye, and watched as she crept up next to me, and then eventually in front of me.

“I’m third!” I cheered in my head. I knew Samantha was second; I must have passed her briefly to gain second, and now she’s simply back to restore order in the world. I’m third, I settled. I did not care. I was done.

I kept a reasonable pace, only because I could see my mom wildly cheering. I had assumed she was pushing me to take back second, or that we were close to done. But then I saw why she was frantically cheering: Tobey flew by me like I was standing still, and I deserved it. She eventually overtook Samantha as well. As much as she looked like the speed and energy of a freshly-placed relay swimmer, I knew her number as it dashed by along the seawall between North and South Cove. The finish was 100 yards away. I sprinted the rest out of utter embarrassment and the slight glimmer of hope that maybe, just maybe, one of them would burn up, but in the back of my head I knew my place.

Now this is not at all to say that those two women did not earn it, they competed all the way in. I don’t for a moment think if I had a better mindset I would have been assured one of their positions; it would not have even been likely, it just would have been possible. I’m just kicking myself for not trying, not even giving myself a chance, and subsequently wondering each night before I fall asleep what I could have done. The second I stopped competing I earned fourth woman.

That’s about enough violin-backed wallowing in my own pity-party. And if you could not make it down to this point I don’t blame you; this may be more challenging to read than MIMS was to swim (I now know because I’ve done both; it’s a close call). This was a selfish post – it feels incredibly cathartic to get all of this out and explain to people why I’m not exuberantly replying to emails, facebook, and posting all sorts of stuff like I did after Catalina. That was a much different feeling. This one is more of a bittersweet sense of accomplishment: I’ve completed this huge thing I set out to do, and I enjoyed every minute of training for and swimming MIMS, but I know I left something in the river, and that flavors the experience just slightly, much in the way that motor oil flavors the Harlem. Still an incredible experience that I’m proud of and will always remember, but with a less-than-pleasant aftertaste.

So where do I go now? That seems to always be the question after these swims. And with how I feel about MIMS, coming back is definitely on the table. And so is the English Channel, just because at least fifty people have asked when – not if, but when – I’m going to complete the triple crown, and it’s starting to make me consider this option. A 25K maybe, while I’m still young. Or perhaps something entirely different, a random swim for nothing other than the fact that I want to do it. All I know is that there will be more marathon swims…and not just because I have some planned for later this summer. There will be more marathon swims in other summers too. I’m hooked.

But for now, I’m going to let those thoughts float around, enjoy resting my little arms in Europe, and wait until I come back to deal with getting bigger arms and making such decisions. Any and all comments or suggestions are welcome…