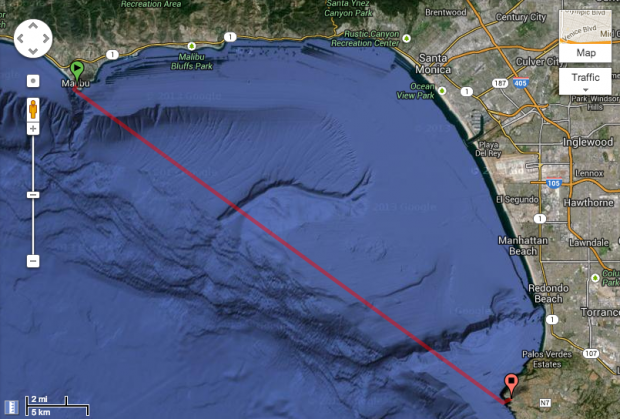 I was driving to No Sleep Records in Huntington Beach, CA to visit Scott, who was working there for the day. My mind began wandering to his friends who were working there, Joey and Chris. Chris owns No Sleep Records and Joey owns 6131 Records. Both record labels were created in Southern California, a place where both men have great pride in being from, to the point that they have tattoos representing their hometowns. As I pondered being so proud of where one is from, I came to the realization that I too am proud of where I live: Los Angeles. I had moved here from Orange County only a year prior, but already I feel a nostalgic love of the city, and call it home. I wasn’t about to go out and get inked, but I suddenly had the urge to do a swim that represented my feelings toward the city of angels, and the map was out by the time I was at the next red light. There it was - so obvious now - the entire bay. I zoomed out. Yeah, that looks about like the distance to Catalina, swimable.

I had been waiting for a swim idea to come my way, but I knew it needed to be an idea that had personal meaning for me, not just a tick off a list. Although I stopped writing shortly thereafter, what my English Channel attempt taught me was the importance of having a connection to what you’re doing, and wanting to do a swim rather than wanting that swim to be done.

I couldn’t hold the idea in any longer. After a swim with Tina I told her about my idea and that I couldn’t find evidence of anyone having done the swim before. Her response was a quiet, “You might want to talk to Forrest.”

Forrest and I met for coffee after a swim. He had the LA Bay idea years ago but had not acted upon it. Together we came up with several goals for the swim, and began the process of planning.

The year seemed to be flying by. I had sprinkled marathon swims throughout the season to keep me honest. I ramped up in May for the longest lake of SCAR, 17-mile Apache Lake. My saintly kayaker and I drove out the night before, did the thing, and then drove back home in the middle of the night. The next morning, on just 3 hours of sleep, I started LA County Lifeguard Training. Welcome sleep-deprivation simulation. 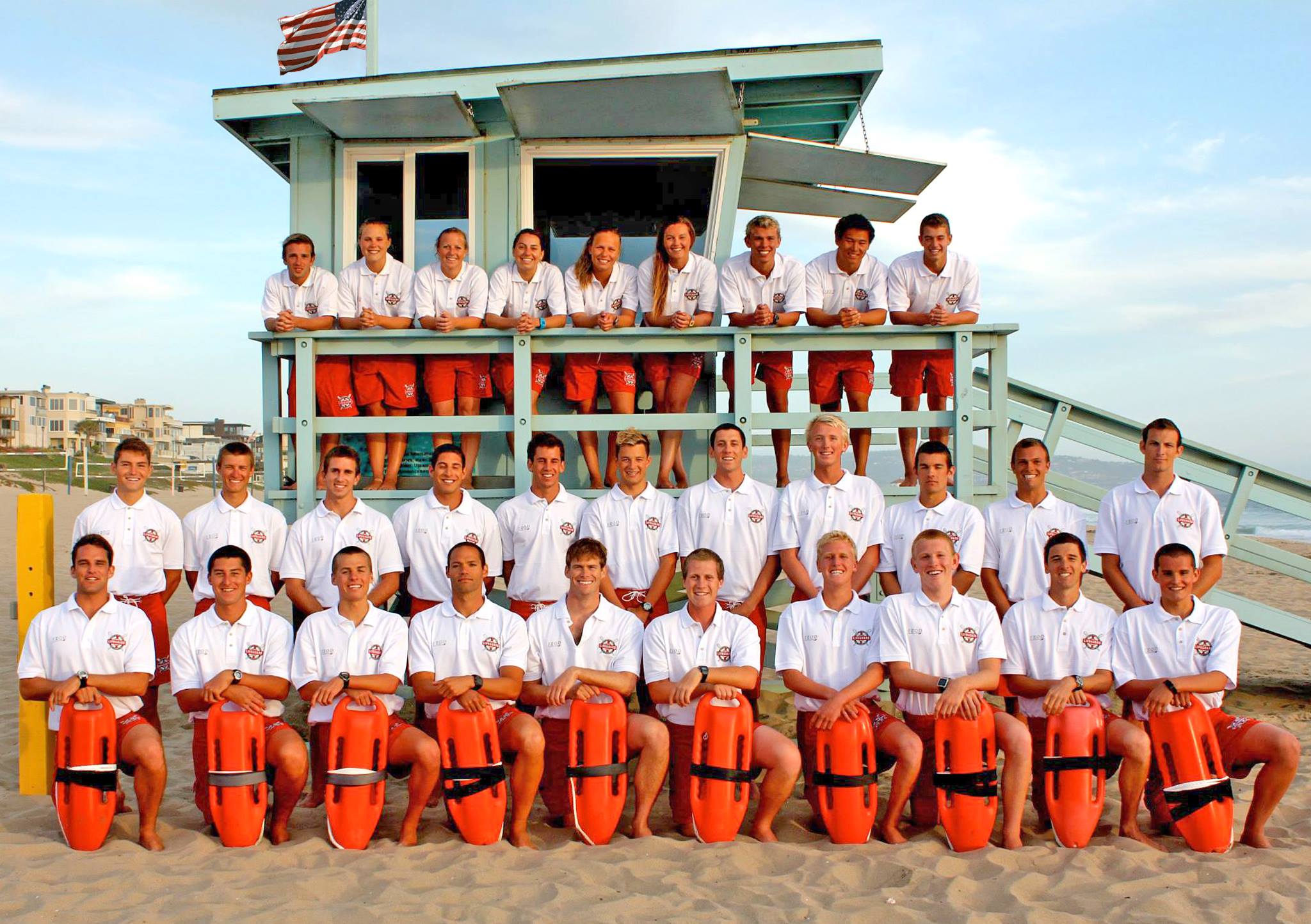 Somehow, I managed to make it through the Academy. The training was intense and kicked my butt, especially as the semester was coming to a close and grading responsibilities increased. Everything converged at the end with our final 3-day weekend of training and Fullerton finals week after that. Then, off to New York with Scott! 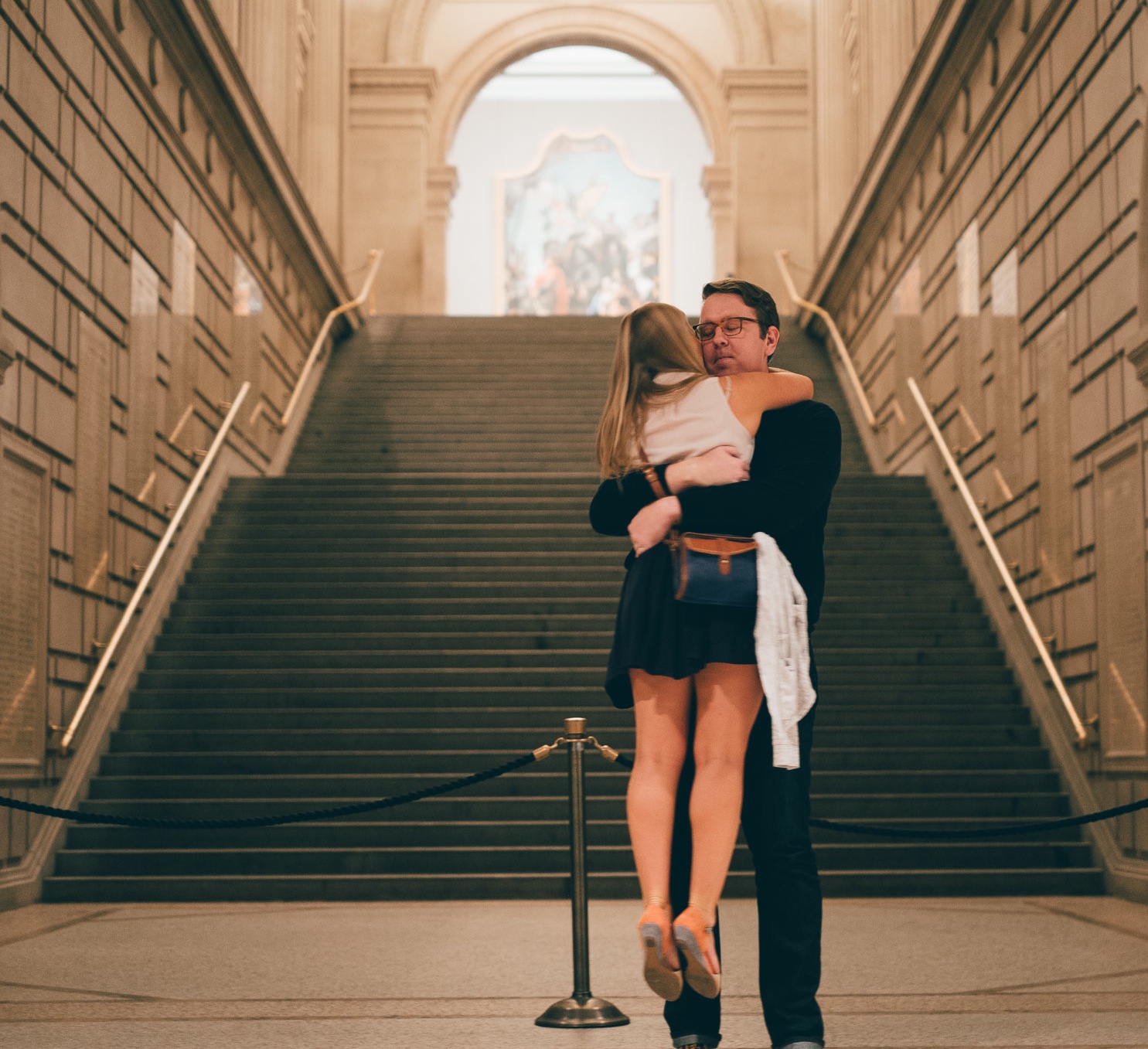 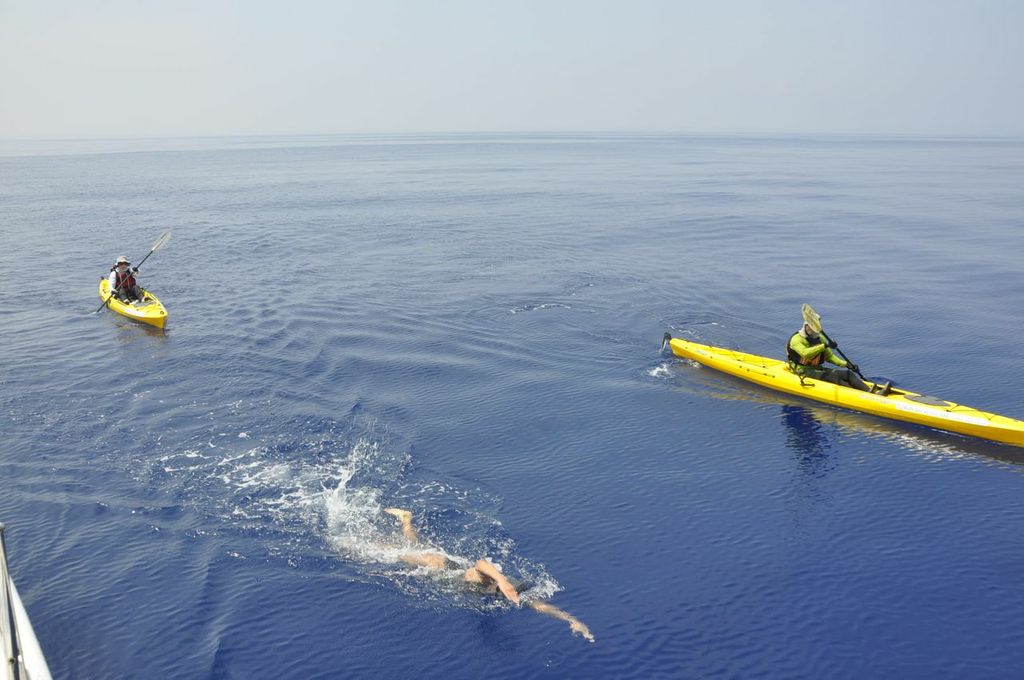 Then, off to Key West to crew for Chloe McCardel’s Cuba to Florida attempt. Keep an eye on her, she’s onto huge things. 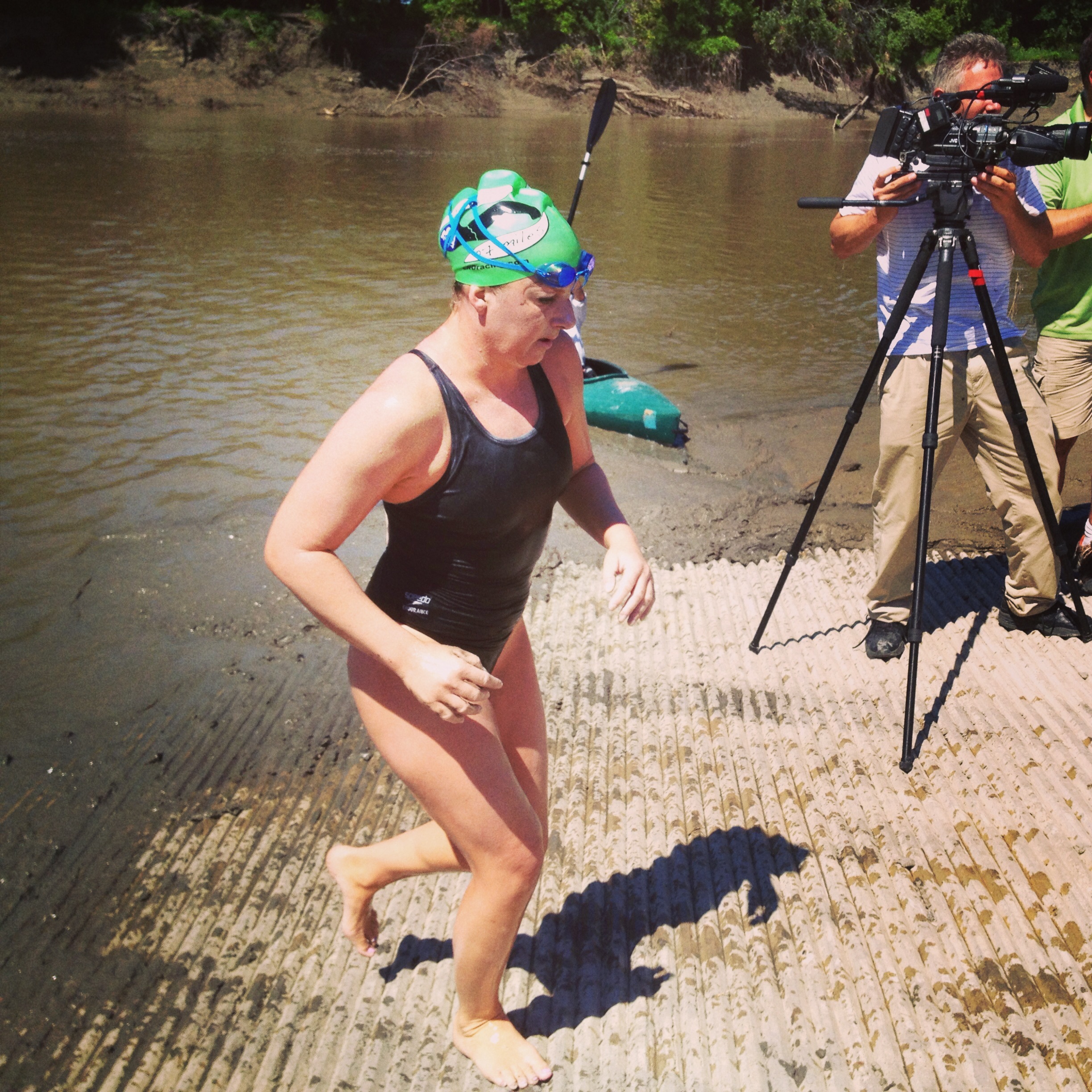 A bit more training, then a brutal but exciting race at END-WET.

And then it was here. I was boarding the Outrider with my crew: Mom as kayaker, Dad on the boat, and Carri and sister Katelyn as support swimmers. We had cheered Forrest on as his boat left port. We followed him and dropped in at Malibu at 12:12am, about an hour and a half after Forrest started. I knew to expect cold water there, and it was: 62-63 for the first 2 hours. After our endless summer in the 70s, this was chilly for me, but I knew it would warm up. As soon as we put some distance on the coast I began to get a few jellyfish stings. A few turned into many, and many turned into an onslaught. After 100, I stopped counting. No one sting was intolerable, although many made me yelp into the water.

I theorize it was the effect of the cumulative poisons that gave me a chill, one I battled for the rest of the swim. Unbeknownst to me, the water gradually warmed up throughout the swim, and by the time we finished it was even 68! No one told my body though. As early as 3am I began to wonder how much of this I could take, and if I was headed for a repeat of last year. Was I going to put my parents in the same position I put Scott in when he had to make the call in England? Was all of this headed to a very expensive and scary hospital stay?

I couldn’t think like that. I reminded myself that I didn’t have to know if I was going to make it or not, I just had to see how far I could go. And as long as I kept checking in and making sure I was coherent, I could make smart choices. We had a rubber ducky attached to the kayak that symbolized having fun in swimming, and that I do this because I choose to do this. As long as I knew what that rubber ducky was about, I was okay.

I asked for warm feeds at one point. I went through phases: cold for a while, then I’d warm up, then cold again. When my support swimmers joined me I tried to push it to keep them warm, and that kept me warm. I had my back up plan to feed every 20 minutes instead of every 30 in case things got really rough.

And then I had my mental .357. I talked to Lenny the morning before the swim. He said when he works with open water swimmers he advises they have a mental .357. If you were in a rough area and walking down a dark alley at night, it would be nice to have a .357 for protection. You wouldn’t be waving the thing around or anything, but you’d have it, just in case you needed to pull it out and protect yourself. I needed to have something like that for the swim, some thought or action I could pull out as a last line of defense in case things started getting really bad. I thought about it for a while, and then later texted him “This is my comeback swim.”

Halfway through the night I pulled out my .357 too early and shot myself in the foot. I thought “this is my comeback swim,” and then immediately realized I wasn’t likely to finish due to the cold, and what a joke it is that my “comeback” swim could potentially end for the same reasons my English Channel attempt ended. I decided I was done with guns for a while.

This was the first swim I didn’t have a critical amount of confidence that I would finish, even at the halfway point. Normally I am fairly confident that, conditions willing, I will complete a swim, and once I get halfway I don’t really see a reason why I wouldn’t be able to. Even in England I felt this way. I wasn’t sure if it was from the cold or from having my first unsuccessful swim last summer, but I never knew I was going to make this swim, at least not until the final stretch. It was a scenario I had not planned for, and it messed with my head. The best I could do was to adapt a phrase I use in climbing. I’m not a good climber by any means, but when I attempt a route that is a grade or two beyond what I am normally capable of, I simply turn to Scott (who is belaying me) and say “I’m just going to see how high I can go.” We don’t climb competitively, we just do it for fun, for the sake of climbing. And that was the approach I needed to use here: I don’t need to know I’ll finish this swim, I’m just going to see how far I can go.

Forrest’s boat appeared out of the fog, and we played chase for a couple of hours. I kept warding off the cold with my will to see how far I could go. I was sore everywhere, and could tell I was barely holding it together. And then the Advil dropped. I asked for my last Advil at a feeding, and I dropped it, and broke into a sob-laugh combo, but more sob than laugh. It was awful. I could see land and we were there, but I still didn’t know if I’d make it. My crew found me another Advil and I regained composure. Off to see how close I could get to the top. The closer I got and the more I knew we were going to make it, the more that .357 kept coming back. Was I going to make it? It sure looked like it. I began to realize this wasn’t just any “comeback” swim, it’s one in which I face the very thing I succumbed to last summer. It almost meant more that way. It made all the self-inflicted suffering worth it.

Forrest and I finished the swim together, at the exact same time, meeting two of our goals. He looked like he could have turned around, and then he changed into shorts on his boat. Tina rushed me back to my boat where hot water bottles and an emergency blanket were administered. We had exceptionally different experiences, especially post-swim, but then again, we are in different leagues. I learned so much from him, as well as where my personal limits lie. I couldn’t have imagined a more meaningful swim for 2013, and am so grateful to have shared the experience with everyone who was involved. It truly was a team effort.