On Saturday, a small group of Southern California open water swimmers, myself included, set off for an adventuresome day of pier swimming. Forrest Nelson, Tina Neill, Dan Schumacher, and myself began our morning with a pier swim around Malibu pier, drove to Santa Monica and swam around that pier, drove to Venice and swam that pier, and so forth until we reached Ocean Beach in San Diego. It was an epic day of pier swimming.

While not an extremely long day of swimming (we estimated the total swim distance at just over 9 miles), there were several other concerns. The ins-and-outs would cause muscles to tighten and get sore, and the decreasing water temperature in late October would only hasten that process. We would have difficulty re-warming and getting dry. In short, we needed lots of stuff. Our van was filled with Carol Sing (our driver and mom for the day), four swimmers, and probably more gear than person:

We got an early start, beginning Malibu pier at 5:23am. The first dark swim brought a healthy amount of butterflies and playful complaining, but we eventually took the plunge and were around in 8 minutes. The water felt brisk, roughly 62, and we rushed back to the car, blasted the heater, and headed for Santa Monica. The cool air froze our feet, and I had to bust out my fuzzy slippers early. I hobbled on what felt like stumps to the water’s edge by the well-lit pier. We were around that pier in 9 minutes, and I thoroughly enjoyed swimming by the glowing ferris wheel. 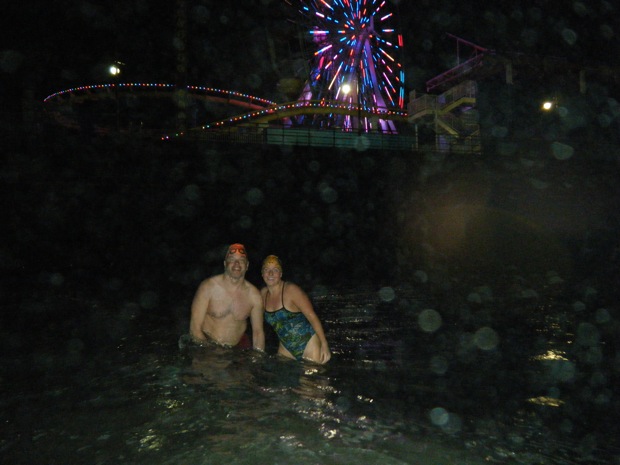 Upon exiting the water, we came upon what looked like three beached sand sharks huddled together, desperately trying to wiggle towards the ocean. An inch of water would wash over them and they would flap around but not make any progress. Finally, a larger wave brought about a foot of water over them, and then they were off. 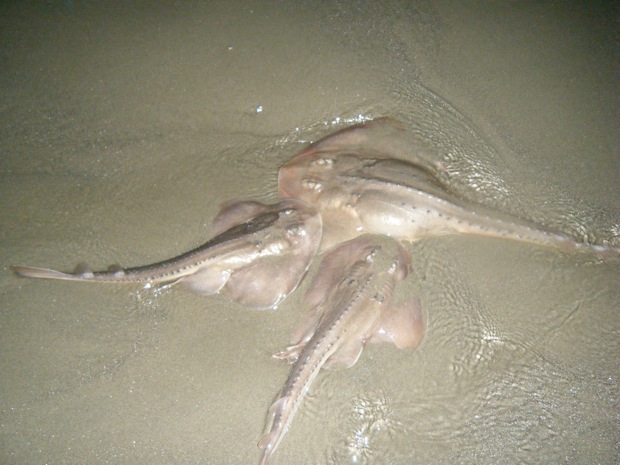 The early swims seemed to be going well, until the cops showed up. Apparently someone had called 9-1-1 after seeing four cheerful swimmers with Jack-o-lantern caps and glowsticks enter the water in the dark of night. Perhaps they thought we were drunk. Perhaps we were. The cop had stood at the edge of the Santa Monica pier and asked “How far are you guys going?” as I was taking a photo. Not realizing he was anyone other than a curious bystander or fisherman, I shouted, “Around all the piers!” He responded, “Till South Bay?” And I exclaimed, “Till San Diego!!!” The cop came down to ask a few more questions, including “WHY?!” To which Forrest replied, “Because it’s Saturday.” He wished us good luck and said he would not stop us because we looked like efficient swimmers.

Venice brought visits from Scott and my uncle’s in-laws, Kevin and Casey. Tina had made goody bags with Halloween candy in them for our first 10 visitors. Under the Venice pier, Uncle Dan found some non-traditional swimming fuel and posed with it. A bit of giddiness is required on such crazy swims. I suppose the 9-1-1 caller had ample reason to suspect drunkenness. 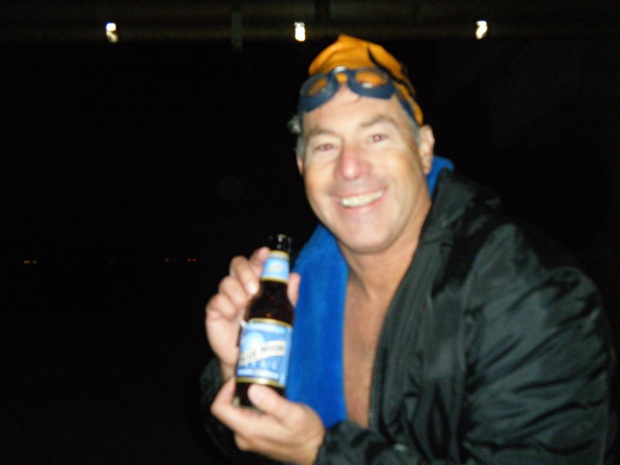 Manhattan and Hermosa went by fast. The sunrise was beautiful and we were visited by John York, who also got a bag of (melted) candy. In between those piers we made a quick Starbucks stop for some coffee to warm us up. For some, this complicated our between-swimmer competition of seeing who could wear their cap and goggles the longest without taking them off. Tina and I were the only ones left at this point, and decided to raise the stakes by ordering with our goggles on our eyes. The barista was not nearly as entertained as we were. Uncle Dan and Forrest had removed themselves from the goofy competition; however, I would suggest Uncle Dan’s outfit below is just as bold. He really looked naked. 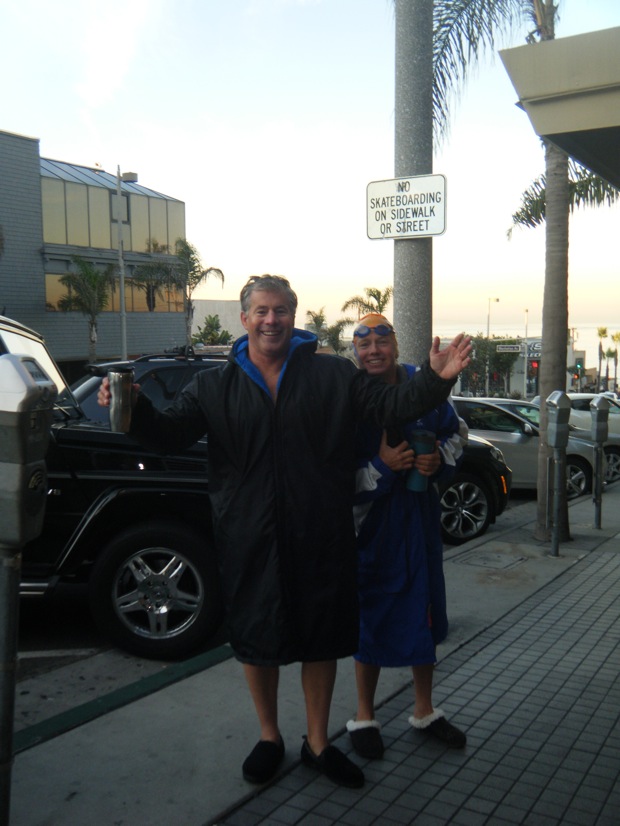 Next up: Belmont, Seal, and Huntington. Scott’s parents, Cam and Phil, were there for all three and were instrumental in helping us find the best parking and navigate around a surf competition south of the Huntington pier. Every minute we saved was crucial. We wanted to beat the sun to Ocean Pier and were uncertain of what traffic would have in store for us after Orange County. En route to the Huntington pier, we found the same buoys as the Laguna Main buoy we love to hang onto. So rarely do we have the opportunity to hug a buoy that isn’t covered with bird poo. 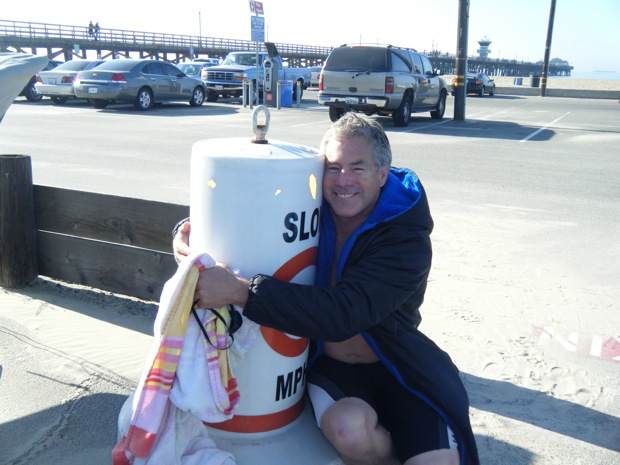 Cam and Phil also got lucky in Huntington - if they could see us from the pier, they were treated to Uncle Dan’s one-of-a-kind Stingray Shuffle:

They got this great shot of us going though the many surfers at Huntington. We swam around the pier and then came through the pylons back to the north side to avoid exiting the water in the middle of the surf contest. 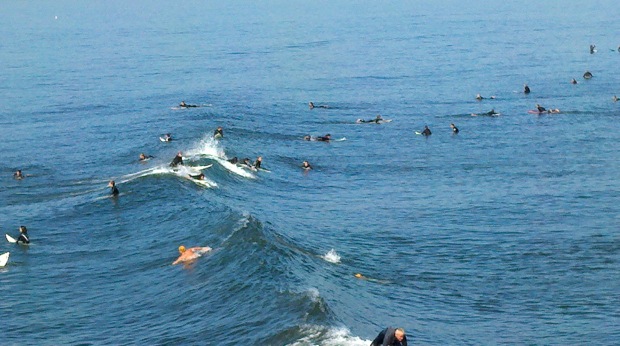 My parents and Tina’s friend Dick came to Newport and Balboa piers. My dad swam with us around Newport. They also brought us fresh towels and encouragement in exchange for melted candy and more Stingray Shuffle entertainment. 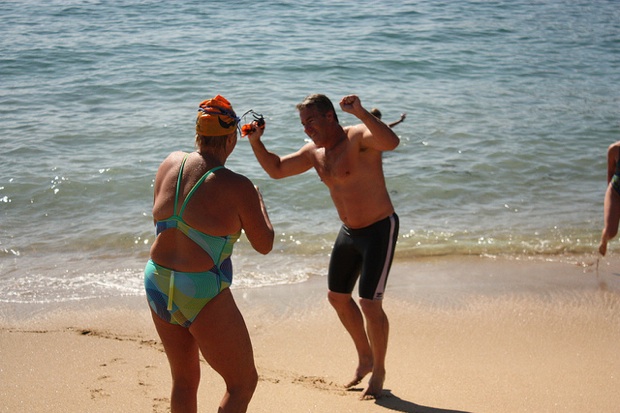 Off to San Clemente, where it was so crowded that Carol had to drop us off and drive around until we were done. We saw Shan and Dylan, Dan’s wife and son. It was this pier where I was having a difficult time. I had been cold all day and was finally feeling the effects of 10 swims and a 3:50am wake-up. I was tired and cranky. Luckily, it didn’t last. Oceanside was long but it felt good. Part of the problem was that the first 5 minutes of each swim was challenging just to get the muscles moving and warm again. My stroke felt sluggish until the very end when I was warmed up, but then we were done. At least Oceanside offered a bit more swimming.

The outgoing tide had left half of Scripps pier exposed. It felt more like a walk-swim-walk. Maybe a 6 minute swim at best, but still a fun one. 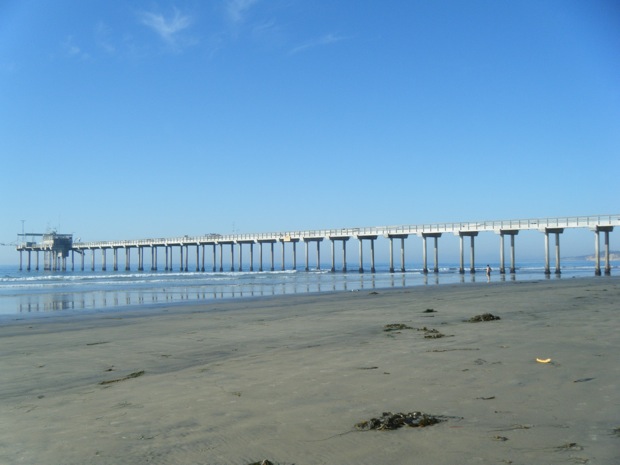 Since there was such a long, sloping beach, Uncle Dan decided to entertain us all with his open water racing start:

Pacific Beach pier was equally brief. And then all that was left was the big one, Ocean Beach pier, the longest concrete pier on the West Coast, one mile around. There was no shortage of fisherman, so we swung this one wide. We stopped at the top to show off our Halloween caps. 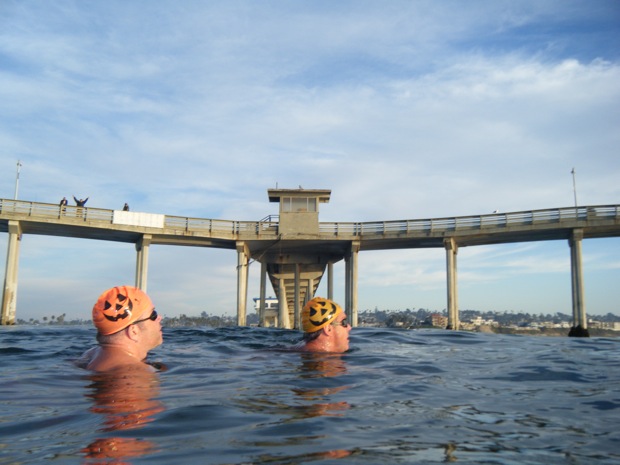 This was another pier we had to swim around and then cross through the pylons and exit on the same side we entered. The low tide had exposed the tide pools on the south side, creating a treacherous and stinky exit. We had to perfectly time crossing under the pier because of the large swells and small distance between mussel-covered pylons. We safely exited to the surprise of two more visitors: my grandparents.

We were so happy to be done swimming and finally take our damp suits off. Tina (who outlasted me by far in the cap and goggle challenge - I caved at Balboa) finally took her gear off. We were so grateful to our wonderful land support and everyone who came out to wish us luck. Most importantly though, we could not have made it without our patient driver and mother for the day, Carol. She tolerated our goofiness, grumpiness, and slowness all day, and drove us 200+ miles in a heated car. Each swim she recorded our time, watched our things on the beach, and made sure we were safe.

Here’s the gang, relieved to be done at Ocean Beach. 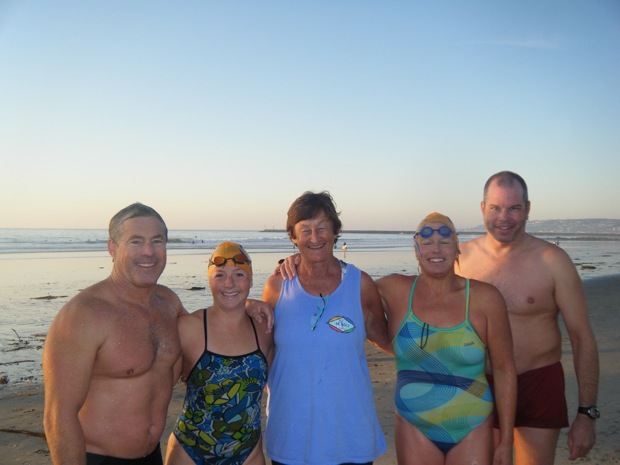 There are plenty more pictures that could not fit in this blog. I took these:

And my dad took these:

The following day, Mike Lewis interviewed me about the swims: